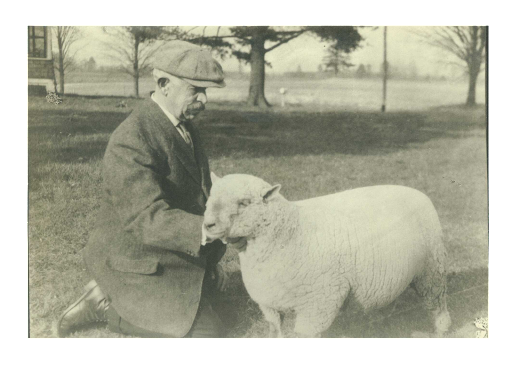 Sheep, undated. University Photograph Collection (RG 110-176). Special Collections and University Archives, University of Massachusetts Amherst Libraries.
Tucked between tobacco fields and behind distinctive complexes of barns and outbuildings, sheep farming is alive and well in Hampshire County. Today, sheep draw together an elaborate agricultural network with complementary focuses, from fiber to fostering the next generation of sheep farmers. Multiple times a year, this community comes together to share knowledge, showcase some of the finest of their flocks, and celebrate all things sheep.

​The urge to develop and maintain this community of sheep-inspired folks is not new. For over 200 hundred years, Hampshire County residents have formed communities around sheep to develop best agricultural practices, educate the public, and share wooly wisdom. A variety of agricultural organizations, many of which still exist today, have been created to support the sheep-farming community through their institutional efforts, alongside broader farming trends, larger market forces, or local needs. Each of them has contributed meaningfully to the sheep farming present and future in Hampshire County.

Massachusetts Society for Promoting Agriculture
As early as 1792, local farmers eager to discuss best practices for a range of farm activities could join the Massachusetts Society for Promoting Agriculture, which hoped to improve agricultural practices by encouraging and sharing applied research. Members aimed “to make experiments themselves and invite others thereto on the subject of agriculture...[and] to give handsome premiums to the men of enterprise who have by their inquiries made useful discoveries and communicated them to the public." Among the premiums offered was one for “the most and best wool from a given number of sheep.”1 Early members from Hampshire County included Hadley’s Charles Phelps, Jr of Hadley, a farmer and public official, and Northampton’s Samuel Henshaw, a preacher-turned-lawyer who would eventually serve as a prominent local judge.2 The MSPA continues to thrive: it has now been serving Massachusetts farmers and their communities for some 230 years.  Over the years, the MSPA has undertaken a wide range of activities in support of agriculture in general, supporting efforts in and around scientific research, youth development, land conservation, and horticulture. Today, the MSPA supports agricultural endeavors in the state through multiple grants every year. 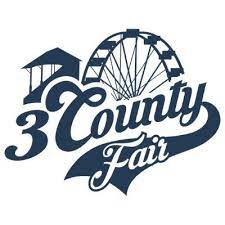 The Hampshire, Hampden, Franklin Agricultural Society and the Three-County Fair

Inspired by the Massachusetts Society for Promoting Agriculture, other agricultural societies appeared all across early nineteenth-century Massachusetts. Local farmers formed the Hampden, Franklin, and Hampden Agricultural Society in 1818, to promote agricultural education and the latest in agricultural science. Often the Society would invite lectures from prominent Massachusetts men who could speak to intersecting issues as well, like Myron Lawrence, lawyer and aspiring politician, who encouraged the increase in domestic woolen manufactures as a benefit for the local sheep farmer, whose “flocks would revive, and his pastures again tenanted by that least expensive, and most profitable species of stock.”3 The society, like the MSPA, also used fairs and premiums as incentives to develop excellence in sheep and wool production.  For instance, at the 1842 fair, the committee appointed to review “domestic manufactures” awarded prizes to women and men from across the county for excellence in woolen and flannel cloths, as well as woolen carpets and counterpanes, gloves and mittens.  They gave special notice to the Northampton Woolen Co. for its “fancy wove cloths” (an “article manufactured at but few establishments in this country”); they also praised wool carpets made by local women, including one made by Mrs. Theo Bridgeman of Belchertown “made entirely of old woolen rags”--especially “commendable,” as “such economy, which allows nothing to be wasted” is “much to be respected.”4 Other fairs aimed to “encourage the raising of sheep that will produce the greatest profit” by offering prizes for the “”best long or middle wooled buck” (designed breeds like Leicesters and Cotswolds in the former category, and Southdowns and Norfiolk in the latter) as well as “Fine Wool’d” sheep “for the Spanish and Saxon varieties of the Merino.”5 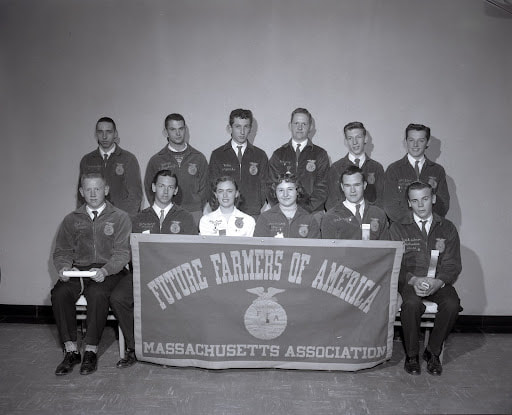 Future Farmers of America, Massachusetts Association, 1961. 61-90-02. Robert S. Cox Special Collections and University Archives.
Future Farmers of America and Smith Agricultural and Vocational School
Future Farmers of America (FFA) aims to empower the next generation of farmers through agricultural education. The Massachusetts FFA chapter has been active since 1930, when young people first began participating in the FFA’s “oratorical contents” at the Eastern States Exposition and elsewhere; by 1932, FFA members were exhibiting in at the Three County Fair’s youth department hall alongside 4-H clubs and other groups and individuals.10 Today the FFA continues to engage many of Hampshire County’s youth today in their local chapter based at Smith Agricultural and Vocational School in Northampton.11 Founded in 1908, the school was a product of an extraordinary charitable gift in the will of Oliver Smith. A prosperous farmer out of Hatfield who was famously frugal during his lifetime, his will in 1845 established a trust of $30,000 to be invested for 60 years and then used to establish a school instructing students in the “art and science of Agriculture or in some Mechanic art.”12 The school grounds include Oliver Smith Farm, with over 500 acres, barns, and multiple farm animals, including sheep. Today, students at SVAHS can take classes in Animal Science, Horticulture and Forestry, and Agricultural Mechanics to foster a future generation of farmers in Hampshire County. 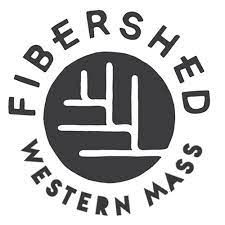 Western Mass Fibershed
In the 21st century, the Western Mass Fibershed aims to support “a thriving, sustainable, and restorative local/regional fiber economy.” The “Fibershed'' concept was first developed by a gathering of Californians who were concerned about environmental impacts in the fashion industry, as well as the creation and perpetuation of inequities worldwide across global supply chains.15 They also noted that “only 2 percent of this nation’s clothing” was produced here, “contrasted with 95 percent in 1960.”16 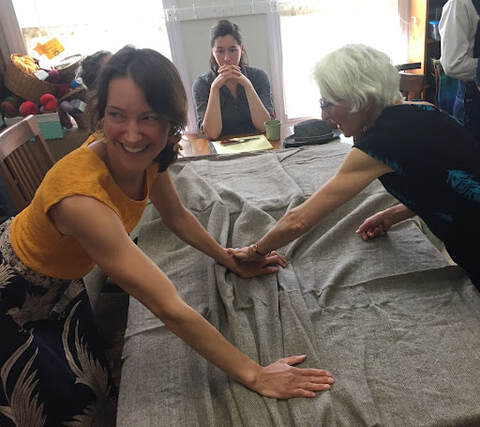 Western Mass Fibershed gathering with Katie Cavacco, Leonore Alaniz, and Anna Gilbert Duvenek, 2019. Photo by Michelle Parrish.
​Likeminded residents of Western Mass came together to advance this vision. “ “There is already an incredibly vibrant fiber arts community in Western Mass,” said co-founder Michelle Parrish, “with lots of shepherds as well as the Western Massachusetts Sheep and Woolcraft Fair in Cummington, and a network of knitters and weavers already in place. We wanted to have something distinctive that wasn’t yet happening.”17

​Their first project in 2018 was to make local woolen cloth, showcased in an exhibit at the Hitchcock Center in Amherst. The group has just completed their third cycle of cloth production, and also produces blankets and knitting yarn. The Western Massachusetts group works to connect a variety of fiber-related groups, including farmers, spinners, weavers, designers, and consumers, and holds events regularly around the area. Regional fiber networks like the Western Mass Fibershed are an important aspect of a more sustainable fiber future. 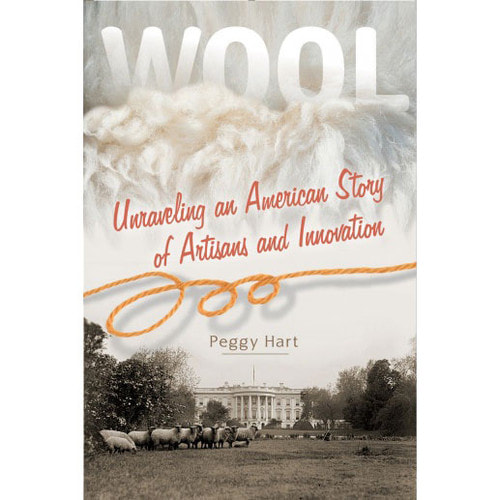 Western Mass Fibershed member Peggy Hart also explores the rich history of wool in America in her book Wool: Unraveling an American Story of Artisans and Innovations (Schiffer, 2017).
Local Sheep, Global Connections
Sheep have always been a global story. From British heritage breeds, woolen markets in Australia, or sheep meat consumption in Iceland, sheep are valued across the globe. Hampshire County sheep farms also play a larger role outside of their local geography. Wool from Hampshire County travels to Boston to become woolen fabric. Sheep raised for meat in Hampshire County grace the tables of New York City restaurants. Sheep invoke futures of sustainable fashion and renewable wool fiber sources, sustainable alternatives to modern lawncare and ground management, and more we have yet to imagine. As you look around your local community, imagine where Hampshire County sheep will travel next and what futures they might inspire!

​
Local Sheep, Local Connections
The future of sheep farming in Hampshire County hinges upon its existing community, as well as expansion to include others in its growing flock of sheep enthusiasts and supporters. Do you have a child interested in agriculture? Are you a fiber enthusiast looking for local fleeces or yarn? Are you seeking local lamb for your dinner table? In addition to the many organizations listed and linked above, the resources below may help inspire connections for your future involvement in the Hampshire County sheep community!

Further Resources:
Find a farmer’s market near you in Hampshire County, and check their vendor list for sheep farmers selling lamb or sheep-related goods.
Ask your nearby yarn or fiber store about locally raised, spun, or dyed fiber that they might have in stock, or consult the directory of the Western Mass Fibershed!