Sheep in the Five Colleges 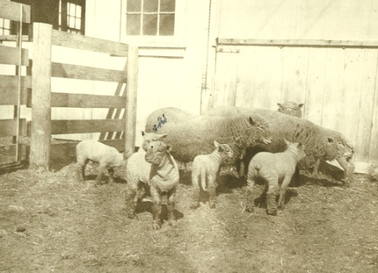 Sheep, undated. University Photograph Collection (RG 110-176). Special Collections and University Archives, University of Massachusetts Amherst Libraries.
In 1868, the still-new MAC farm included about 20 Southdown ewes and 2 rams, Southdowns having come to succeed merinos in favor, being believed to produce both more mutton and more wool. By 1870, trustees describing the first barn complex reported having built a sheep pen able to house up to 50 sheep.  In the mid 1870s, several long-wooled Cotswolds (made popular in part by the scarcity of cotton in the mid nineteenth century, a consequence of the U.S. Civil War) were added to the campus flock.

In the 1890s MAC’s original barn complex was replaced by the Brooks Farm complex, around the site of the current Recreation Center (along the east side of Commonwealth Avenue across from the Mullins Center), which in addition to 100 head of cattle and 14 horses, accommodated 75 sheep.  The sheep barn that was part of this complex only lasted a few years; after it was destroyed in a 1905 fire a new sheep barn was built in what was then the western pasture (the site of the campus soccer fields today).

​Among the most distinctive features of Hampshire County is the presence of so many institutions of higher learning, all gathered together in this corner of western Massachusetts.  If the region has been known through the years for the production of fattened cattle, tobacco cultivation, or crops from asparagus to zucchini, today it also identifies as a hub of higher education and the home to the “Five Colleges:” Amherst College, Hampshire College, Mount Holyoke College, Smith College, and the University of Massachusetts Amherst.  Agricultural history and practice has been both entwined with and separate from the agendas of these several institutions.

When Amherst College was founded in 1821, the Merino Craze sweeping New England had steadily increased the number of sheep in the area, but given the liberal arts focus of the campus and curriculum, agriculture was not a subject of study.  Later in the nineteenth century two women’s colleges were established here: Mount Holyoke College, founded in South Hadley in 1837 as the Mount Holyoke Female Seminary, and Smith College, chartered in 1871 by donor and founder Sophia Smith, opening in Northampton in 1875.  As each of these campuses aimed to provide women access to liberal arts education, it is unsurprising that farmwork played little role in the curriculum or daily life of students at those institutions, too.

The most significant development at the intersection of sheep cultivation and institutions of higher learning in the nineteenth century came with the creation of the Massachusetts Agricultural College (MAC).  Over time, the cultivation of sheep on campus served both the on-campus curriculum, as students learned best practices in how to raise sheep, gather wool, and process animals, and also public education objectives, as researchers in agricultural sciences sought to share their expertise and knowledge to audiences around the Commonwealth. 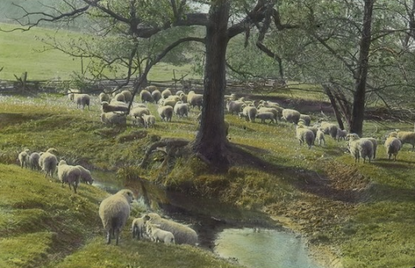 Waugh, F. A. (Frank Albert), 1869-1943. Flock of Sheep grazing by steam, field and trees, undated. Frank A. Waugh Papers (FS 088). Special Collections and University Archives, University of Massachusetts Amherst Libraries.
​​At the turn of the twentieth century Professor Frank Waugh arrived at MAC, where he established the landscape gardening department–only the second in the U.S. (later the department of landscape architecture).  He also steered the work around the design and maintenance of the campus landscape.  Among other proposals, in thinking during the 1920s about the area near the pond, the heart of campus, Waugh recommended “preserving the meadow-like character of the area by keeping up a good sod.” This area should not be mowed with a lawn mower,” he continued, “but should be kept for hay. A proper alternative would be to pasture it with sheep.”1

In 1917, MAC purchased a 75-acre property on the east side of East Pleasant Street, the onetime farm of David H. Tillson (1848-1927), who had worked as MAC’s farm superintendent from 1879 to 1886.2  “War emergency crops” were planted initially, though in time the fields supported experimentation. 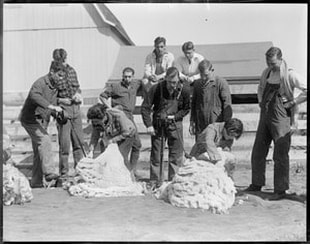 Women shearing sheep in a 1925 sheep shearing contest at MAC. Leslie Jones (Source: Digital Commonwealth). Though women were admitted to MAC beginning in the 1890s, it wasn’t until the 1920s that co-education became firmly established. 8
By the 1920s, annual “Farm and Home” weeks held in summer offered “Massachusetts Farmers and Homemakers” lectures on sheep cultivation as part of a larger set of offerings in support of rural life. MAC committed funds to crafting exhibits at the Eastern States Exposition, bringing 20 sheep alongside horses and cattle as part of a larger public education program that took the campus farm operations to agricultural fairs around Massachusetts.
​ 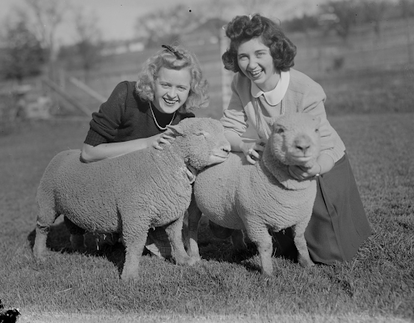 “Girls with sheep, Massachusetts Agricultural College,” October 1941, photo by Leslie Jones. https://www.digitalcommonwealth.org/search/commonwealth:8c97m9589
Through the second quarter of the twentieth century, the campus curriculum remained essentially the “scientific agricultural program” established at the outset.3 Pressure from alumni and other constituencies was already mounting toward the creation of a university, but instead the “agricultural college” became the Massachusetts State College (MSC).  While changes came to the curriculum, including greater interest in and emphasis on the liberal arts, in this era (that is, from 1931 to 1947), many of the farm activities continued.  Campus Southdowns won prizes at the Eastern States Exposition, as well as, beginning in the late 1930s, the annual “Little International” livestock competitions sponsored by the Animal Husbandry club. The “flockmaster” in these years was Claude Koch, a scotsman.  By 1945, Tillson Farm supported a flock of around 100.4

The late 1940s–which witnessed WWII, the post-war “G.I. Bill” (providing a range of benefits to veterans) and ensuing boom in college enrollment–helped to prompt the birth of the University of Massachusetts Amherst.  This would come to mean shifting priorities, as interest in emerging research fields coupled with the distinct needs of a new population of students gradually occupied increasing administrative attention.  The campus identity as an institution committed to agricultural experimentation and the dissemination of that new knowledge was transformed as schools emerged devoted to engineering and business, nursing and education, and physical education. In the 1960s, for instance, University trustees voted to repurpose land dedicated to sheep and swine production to playing fields, prompting the sheep to be relocated.5 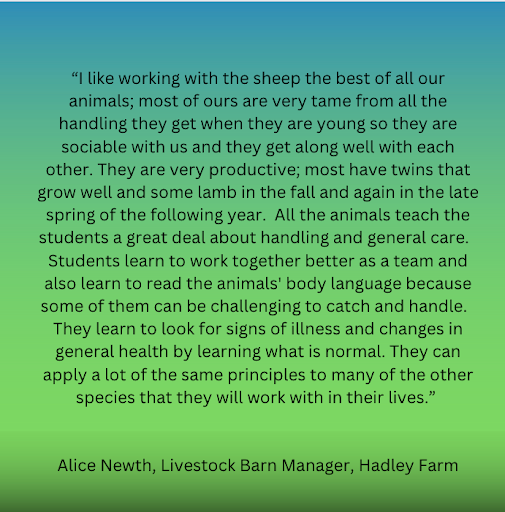 In the 1970s the campus farm maintained about 80 ewes, though the size of the flock shrunk over time.  In 1990, the University of Massachusetts Foundation purchased the “Young Meadow Farm” in Hadley, land just west of the onetime sheep pasture on the western edge of campus, and rechristened it the “Hadley Farm.”  Today this 130-acre animal science complex for the College of Food and Natural Resources is home to the UMass Equine and Livestock Research and Education Farm where35 sheep as well as goats, pigs, and chickens reside).  Today, UMass students come to the barn for classes and teaching labs, and to work.  Many are planning careers in veterinary fields.

​
Today this resource for agricultural research and teaching is not the only such enterprise across the landscape of higher education in Hampshire County.  A century after the county’s agricultural college opened its doors, a very different enterprise sprung up at the area’s newest college campus.  Conceived in the 1960s as an experimental approach to higher education grounded in self-directed learning, Hampshire College opened in 1970.  The curriculum emphasized the pursuit of individual projects over the completion of coursework.  In the late 1970s, professor Paul Slater, whose thesis had asked “How Shall We Preserve Our Family Farms?,” envisioned a “farm center” that would anchor undergraduate studies in agriculture while also seeking to revitalize the local farm economy.6  Sheep production was central to the Farm’s vision and mission.   In the nineteenth century, an early funding proposal observed, some 350,000 sheep grazed Massachusetts, but by the last quarter of the twentieth century that number had dropped to a mere 8000.  The decline reflected the effects of competition with western farmers alongside heightened federal regulation (designed to address challenges of the much-larger sheep industry of the Midwest, and difficult for small New England producers to accommodate) and the ongoing effect of local predators. 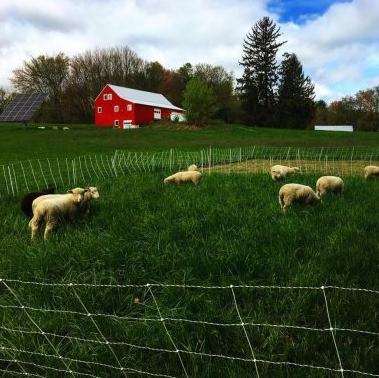 Lambs in Grass with CSA Barn,” Hampshire College Farm Center, https://sites.hampshire.edu/ffs/gallery/.
Planners observed that “major obstacles” of the last half-century facing sheep production included over-reliance on breeds suited for large farms to the west, and not conditions more relevant in New England; the rebounding of predators like the Eastern Coyote; and the high cost of feed, compelling sheep farmers to rely on grazing, with insufficient understanding of high protein forage crops.  The proposed Farm Center would consider which breeds might be most profitable in local conditions, exploring cross-breeding to discover breeds “particularly suited to the climactic and natural forage conditions of New England.”  The farm would also revive guard dogs as protectors of flocks–again exploring the breeding and training of dogs traditionally associated with this work.  Lastly, they would undertake research into “alternative varieties of forage” as well as which woodland and roadside plants offer the most nutrition, palatability, and nitrogen-fixing properties.  All of this work was undertaken in service of larger aims to support small farming in the region. Interestingly, the venerable Massachusetts Society for Promoting Agriculture was one of the Center’s initial funders.

Planners proposed a flock of Wiltshire Horn, given their high lambing rate and strong milk production.  Finnish Landrace sheep, known for “fecundity,” would be introduced too, as well as Dorset. Sheep could be sourced from the American Minor Breeds Conservancy, and–interestingly–the living history museum Old Sturbridge Village.  By 1983, the New York Times called the Center “New England's largest sheep farm.”7