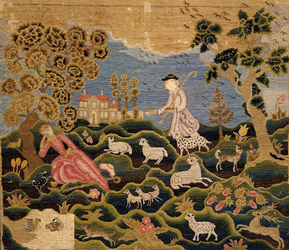 needlework picture, Shepherd and Shepherdess, Ann Gardner, Boston; 1770. Embroidered Linen. 57.122.600. Collection of the Metropolitan Museum of Art. Bequest of Mabel Herbert Harper, 1957.
​When settlers from England arrived on the shores of the land that would become the colony of Massachusetts Bay, they recognized immediately the importance the production of wool cloth would have in this climate. The first sheep arrived in the 1620s, the earliest likely being Wiltshire, Romney, and Texel (though these early generations predated English focus on breeding still to come in the eighteenth century, and so these sheep probably did not look like the breeds familiar today)1. As early as 1645, just after the first big wave of English migration came to a close, the Massachusetts General Court encouraged the “preservation and increase” of sheep in order to ensure steady access to wool. Systems of bounties reduced the threat of predators like wolves, while the clearing of pastureland supported the expansion of flocks.

Colonial households depended on both flax from which to make linen and sheep from which to make woolen cloth. Though early American families always preferred imported fabrics when possible for their clothing, the acres of fabric required for sheets, towels, blankets, and other household goods demanded significant focus on sheep production, wool cleaning and carding, spinning, and weaving.  In time, sheep’s wool would take a place among commodities–alongside butter, and tow cloth–that families could bring into merchant’s shops to help settle their accounts, turning wool into a form of currency. 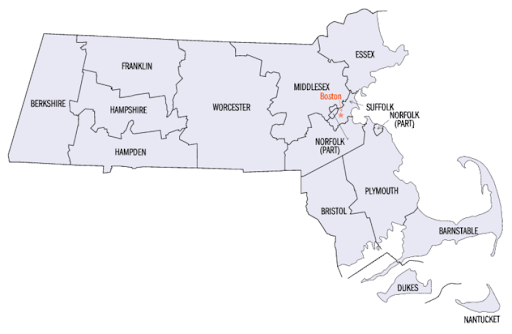 Map, Counties of Massachusetts (Wikipedia)
Edward Johnson, in his 1651 book Wonder-Working Providence of Sion's Savior in New England, estimated that by that date some 3000 sheep grazed Massachusetts land--the “prolific growth of sheep in the colony” being  "’extraordinary’ proof of divine approval.”2 These sheep, he enthused, might produce as much as six tons of raw wool.  Regulation by the General Court of the slaughter of rams and wethers under two years ensured that sheep would supply wool for two years before being butchered for meat.  Other policies protected and nurtured the flock’s fertility and breeding potential. Town governments were instructed to clear common land and make it available for grazing. In some towns, sheep owned by individual households were managed collectively, as one flock

​Sheep came to Hampshire county along with the first English settlers there in the 1650s and 60s.  In the earliest English settlements–Springfield, Northampton, and Hadley–town leaders took active steps to support sheep cultivation.  As early as 1654, town leaders in Springfield voted to give John Pynchon a 15-acre parcel of land called Round Hill in exchange for his commitment to bring forty sheep to the community and sell them to the inhabitants. In 1661, the newly-formed town of Hadley’s annual appointments included a “hayward” whose duties included rounding up sheep “loose” in the meadow.3 Violence associated with the 1670s conflict remembered as King Philip’s War slowed the pace of English colonization efforts, but as English communities emerged from the war, “emphasis was placed on sheep production, with Northampton, Hadley, and Hatfield emerging as major producers at the end of the 17th century.”4  In 1680s Hadley, for instance, the growing number of sheep justified the expense of a shepherd to look after the town’s sheep, and the town built pens in which to house them, which helped the local flock to expand.5 A decade later, Hatfield selectmen set a goal of 700 for the town’s flock by April 1694, appointing five sheep masters to hire a shepherd, and eventually fencing a dedicated pasture.6 They fell short of their aim: by century’s end Hatfield counted just shy of 300 sheep, but the effort reflects larger intention throughout the county to support sheep production.
In the first half of the eighteenth century, sheep production continued to expand “as colonial settlement spread into the eastern and western uplands” which, “because of their rugged and rocky terrain, were more suited for grazing than for crops.”7 In Hadley, the earlier sheep pens were succeeded by a sheep pasture on a northern slope of Mount Holyoke, voted in 1725. In 1737, funds were allocated toward the fencing of a sheep pasture.8

A glimpse into the role of sheep in 18th-century Hampshire County can be found in evidence of spinning and weaving, which evolved over time from a specialized artisanal craft practiced by men to an activity carried out by women dispersed across households.  “In an artisan system,” historian Laurel Thatcher Ulrich has observed, “where families carried their homespun wool and flax to a local weaver, one would expect to find many more households with wheels than with looms, and that is exactly what one discovers in early American inventories.”  But the early eighteenth century saw a dramatic change, and “in Hampshire County, Massachusetts, the shift occurred even earlier [than elsewhere]. Between the end of King Philip's War and the beginning of the eighteenth century, loom ownership increased tenfold while wheel ownership merely doubled.” By 1774, Hampshire County counted “ one weaving household for every 2.5 households with wheels,” evidence of “dispersed household production."

The rupture of rebellion beginning in the 1770s also helped shape the production and consumption of cloth, which in turn affected the production of sheep.  In September 1774 the First Continental Congress declared: “We will use our utmost endeavors to improve the breed of sheep, and increase their number to the greatest extent; and to that end, we will kill them as seldom as may be, especially those of the most profitable kind; nor will we export any to the West Indies or elsewhere; and those of us, who are or may become overstocked with, or can conveniently spare any sheep, will dispose of them to our neighbors, especially to the poorer sort, on moderate terms.”9 Berkshire County’s resolution to embrace the boycott of British goods included a clause affirming that they would take “most prudent care for the raising of sheep, and for the manufacturing of all such clothes as shall be most useful and necessary.”10

The shepherd boy, 1832, p. 6. Rare Book Collections (RB 000). Special Collections and University Archives, University of Massachusetts Amherst Libraries.
As the eighteenth century came to a close, the sheep industry retracted, in part because of the growth of imported cloth in 1790s.  The pages of the Hampshire Gazette in the 1790s included a number of pieces urging farmers to take up sheep cultivation, which could itself be evidence of this retraction.   In ​​November 1794 an article addressed “To farmers”--after advising readers to be careful stewards of their wood, to increase their commitment to potatoes, and to tend well their apple trees–urged readers to “keep more sheep on your dry lands.” “No creatures are so profitable,” the advice continued, and having access to one’s own wool (and flax) reduced dependence on (expensive) imported goods.11  Sheep cultivation linked farmers in the river towns with others in upland communities who pastured their sheep; in June 1795, for instance, Samuel Whipple of Hardwick advertised that he was prepared to take as many as 400 sheep over summer to “20 pastures well fenced,” charging a small fee per head. He added that he would accept pay in the form of sheep in the fall, if desired.12


In the ebb and flow of agricultural and economic change, the early nineteenth century would see an expansion of sheep cultivation, alongside the better-known burst of interest in growing broom-corn, in part because, as historian Christopher Clark has explained, both broom corn and sheep “met the test of multiple function”--broom corn because one could use the brush to make brooms, or use the seed to feed cattle, and sheep because they supplied both wool and meat.  In Hampshire County, sheep production expanded more rapidly than even dairy or beef: “From a few small flocks at the end of the eighteenth century, the number grew until there were 12,000 sheep in 1831, concentrated in upland towns, where they were raised partly for meat, mainly for wool.”